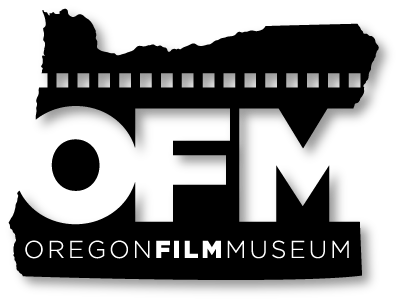 The Oregon Film Museum celebrates the art and legacy of film and television production in Oregon.

The list of film, television, and other media productions in Oregon is stunningly long and impressive: Animal House, The Shining, One Flew Over the Cuckoo’s Nest, Sometimes a Great Notion, Twilight, Rooster Cogburn, Stand By Me, Mr. Holland’s Opus, Drugstore Cowboy, Maverick, Men of Honor, Paint Your Wagon, Pay It Forward, The Postman, The General, Indian Fighter, Portlandia, Grimm, Leverage, The Librarians, Coraline, and ParaNorman, to name a few. In fact, there are more than 400 major productions that Oregon provided the backdrop for.

Why does Oregon play host to so many productions? Our unique landscapes allow media-makers to use Oregon as a backdrop for just about anywhere. We’ve got the high desert, mountains, rivers, forests, cityscapes, small towns, and even beaches and the ocean. Oregon has passed itself off as California, Georgia, South Pacific Islands, and dozens of other places.

So how did Astoria and Clatsop County end up with the Oregon Film Museum? While there have been many more productions made in Portland and along the I-5 corridor, Clatsop County owns bragging rights to some of the most iconic films: Benji The Hunted, Teenage Mutant Ninja Turtles III, Wendy and Lucy, Roaring Timber, Ring of Fire, Kindergarten Cop, Come See The Paradise, Free Willy, The Great Race, Short Circuit, and The Goonies. The television shows Route 66, Movin’ On, and Dexter filmed here. And, of course, our film history, both locally and for the entire state, started with The Fisherman’s Bride in 1909. A production of the Selig Polyscope Company, The Fisherman’s Bride is the first scripted commercial film made in Oregon.

Housed in the old Clatsop County Jail, a working jail from 1914 through 1976, the museum continues the building’s legacy as an actual working set for three movies: The Goonies, Short Circuit, and Come See The Paradise. We invite you to explore the films and production behind making movies in Oregon. Your visit will include the chance to make your own short movie utilizing our sets and green screens.

ALL MOVIES FILMED IN OREGON

“You’re no general. You’re not even a good painter.”

“Because they might have daddy longlegs and um … dead things, Mikey. DEAD THINGS!”

“You thought that was fast? I thought it was fast.”

“Thank you, sir! May I have another?”

“Who dropped a whole truckload of fizzies into the swim meet? Who delivered the medical school cadavers to the alumni dinner? Every Halloween, the trees are filled with underwear. Every spring, the toilets explode.”

“I don’t enjoy killing, Mr. Smith. I do it because I’m addicted to it.”

“If he tries to shake us down, we kill him. Period. We make it fun, but we kill him! End of story.”

“They confiscated everything, even the stuff we didn’t steal!”

“Well, you can’t know. Not until you look at a dumpster. But when you climb into that thing for the first time and you pull those newspapers over you, that’s when you know you’ve messed your life up. Somebody comes along like your son, and gives me a leg up, I’ll take it. Even from a kid, I’ll take it.”

“Now we could do it with conventional weapons that could take years and cost millions of lives. No, I think we have to go all out. I think that this situation absolutely requires a really futile and stupid gesture be done on somebody’s part.”

“Tubas are for fat guys with pimples.”

“Over? Did you say “over”? Nothing is over until we decide it is! Was it over when the Germans bombed Pearl Harbor? Hell no!”

“We don’t have to leave the Goondocks!”

“May I have ten thousand marbles, please?”

“You’re nothing but a drifter who found a bag of mail.”

“I got dragged into this gig kicking and screaming, and now it’s the only thing I want to do.”

“I feel like I’m babysitting, except I’m not getting paid.”

“You give out hope like it was candy in your pocket.”

“Fat, drunk and stupid is no way to go through life, son.”

“Yeah, but you know what? This one, this one right here. This was my dream, my wish. And it didn’t come true. So I’m taking it back. I’m taking them all back.”

“Lord… whatever I’ve done to p— you off… if you could just get me out of this and somehow let me know what it was I promise to rectify the situation.”

“Almost got hung once myself. Didn’t care for it much.”

“First you gotta do the truffle shuffle.”

“Why not? I’d be too frightened. God knows what parts of me you’d steal. I’d wake up with all sorts of things missing.”

“You idiot you glued it on upside down.”

“There’s 50 more houses to tear down after yours.”

“Trust your dear old mother boys. Throw ‘er into four-wheel drive and hold on to your hats.”

“The time has come for someone to put his foot down. And that foot is me.”

“You always want to invest in things people can’t do without. Water and cemeteries… pretty safe bets.”

“What did you ever do to change the world?”

“Yeah, I know. You know the next time you people come and drive us off our land I’m gonna find a nice piece of swamp that’s so God-awful, maybe then you’ll leave us the hell alone.”

“Seven years of college down the drain.”

“We are your symphony Mr. Holland. We are the melodies and the notes of your opus. We are the music of your life.”

“How about electric guitar? Well, this is a marching band. The extension cord will kill us.”

“A cool breeze, a softball game, and two women falling in love.”

The Feast of Love

Your experience begins in the exact same place criminals were booked and processed. The Clatsop County Jail was a set for three movies. Today, it is still a movie set – for your movie!

While you are purchasing tickets and your “set pass,” be sure and check out the first green-screen experience! This will give you a taste of what you will be doing during your visit to the museum. Next, you’ll pass through a small room on your way to the two galleries. Look up, and feel free to play our quote game. Think you know your Oregon Film Quotes? Give it a try … fabulous prizes may await you. 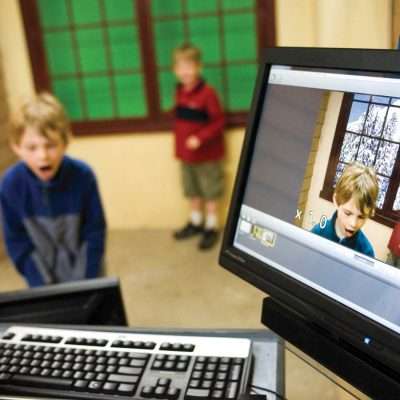 Quiet on the set, please! In here, you’ll discover just what it takes to make a major film or television production. Use your set pass to film your own unique Oregon film. There are three distinct sets. Choose famous scenes and lines to re-enact or make up your own. Will you be the Director or the Cinematographer? What is a Gaffer anyway? How about a Best Boy? Scroll through the touch screens for an introduction to all of the people it takes to produce your favorite movies. Don’t forget to visit the Props Department or the Location Scout’s area. 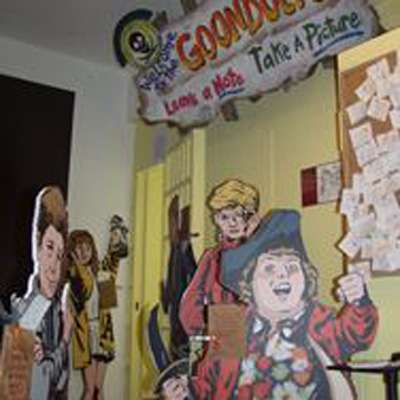 Located in the actual jail cells of the old Clatsop County Jail, Gallery 2 contains all the Goonies information you’ll ever want, including the “Corey Connection,” Goonies Memorabilia, and jail cell number 2 where one of the infamous Fratelli gang was housed. Visitors are encouraged to take their “mug shot,” leave a note for the Goonies and vote for their favorite character from the movie. We also have some great behind-the-scenes footage from Kindergarten Cop.

When the Oregon Film Museum opened in 2010 the “Leave a note for the Goonies” station was supposed to be a temporary placeholder for something else. When we read the notes after the first few months, we decided to keep it permanently. Birthdays, anniversaries, engagements, remembering loved ones, favorite memories and quotations, funny observations, and even amazing artwork – visitors have shared it all on our 3¼ by 4-inch pad of “Goonies Notes.” We can’t wait to read what YOU will tack on the corkboard!

While visiting the Oregon Film Museum be sure and take your “mug shot.” You can tell your friends and family you got arrested during your visit to Astoria and Clatsop County! Send us a photo of your mug and maybe we’ll add it to our roll call of prisoners. 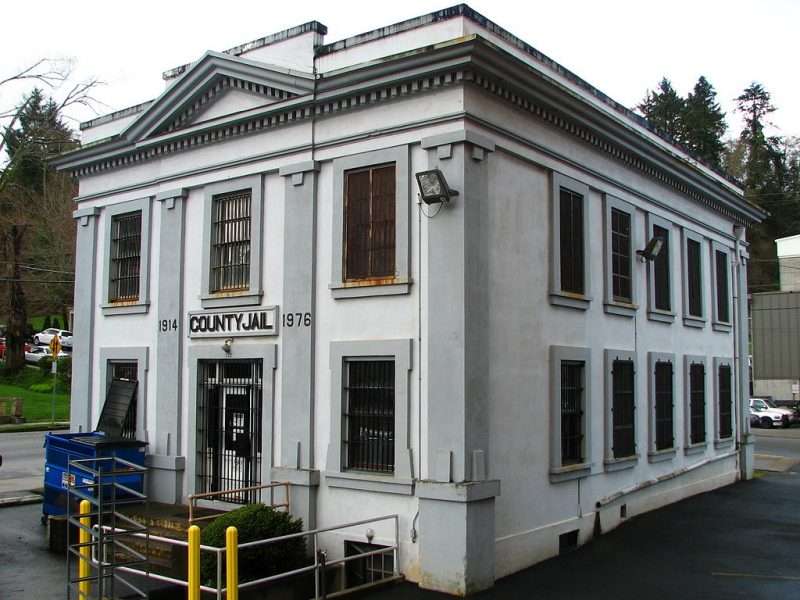 The historic Old Clatsop County Jail (built 1913), located at 732 Duane Street in Astoria, Oregon, United States, is listed on the US National Register of Historic Places (NRHP). Since 1976, it is no longer in use as a jail, and in 2010 it was reopened as the Oregon Film Museum. A corner of the current sheriff’s office and jail is narrowly visible in the right background of this photo. Photo was taken from the rear steps of the county courthouse.

Celebrating the Art and Legacy of Films and Film-Making in the State of Oregon.